Alright, let’s face it, an Indian girl walking through the streets of a foreign country all alone. Quite impossible an event if you hail from an overprotective environment, a community that wants you to travel outside only when you have a husband to escort you around. Being born into a culture of rules and traditions, I could only imagine a bleak possibility of solo-travel anywhere, let alone in a foreign country.

For an entire year, I desired traveling all alone all by myself. I’m not sure why I was sparked with this particular desire? But yeah, there was an unshakable desire to go alone in a foreign country. Nobody to talk to, just lots to see and even more to contemplate about.

I knew my soul wanted to be purged from the unnecessary obligations that people required me. And it was. When a year later, this May 2019, I traveled across 9 and a half time zones and descended into the lap of this charming little city of Philadelphia. I went with dad, but he locked himself in his Conference Convention center the whole time, and I was left to roam around the city ALL BY MYSELF 😉 Can you believe that? Exactly, a year back, it had seemed like a pipe dream and then, it manifested in the strangest of ways.

I walked around, ate wherever I wanted, hoarded bagels out of our morning breakfast shacks, fed them to the homeless by the streets, took buses across the Schuylkill River, secretly took the trains that regularly shuttle in and out of the city, played with the chimps at the zoo, wrote stories and poetry at almost anywhere and everywhere I went.

It has been one of the most exciting days of my life when I had nobody to supervise me, and I had absolute freedom to do whatever I wanted, around a beautiful city like Philly.

I never felt so alive as I did while I was there.

Let me take you around 🙂

The Accidental Discovery of the Moveit App ( downloaded from AppStore)—perfect for mapping out entire routes around anywhere within the city. I had no clue it existed, and it eased the whole route process for me. So if you are traveling alone around the city for the first time, this app can save you the labors of searching travel-routes. It includes streets, buses and bus stops, trains and train stations, explaining where and what changes of travels you must make to reach a specific part of the city or outside 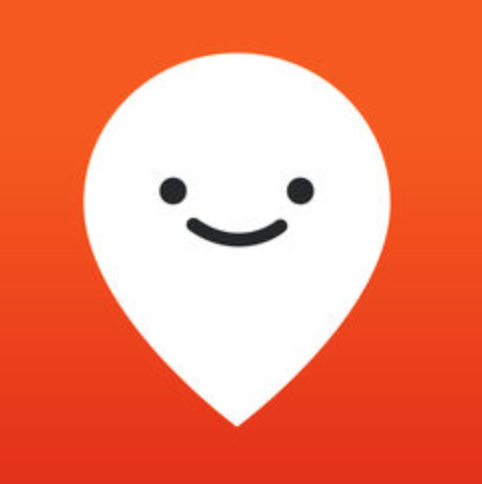 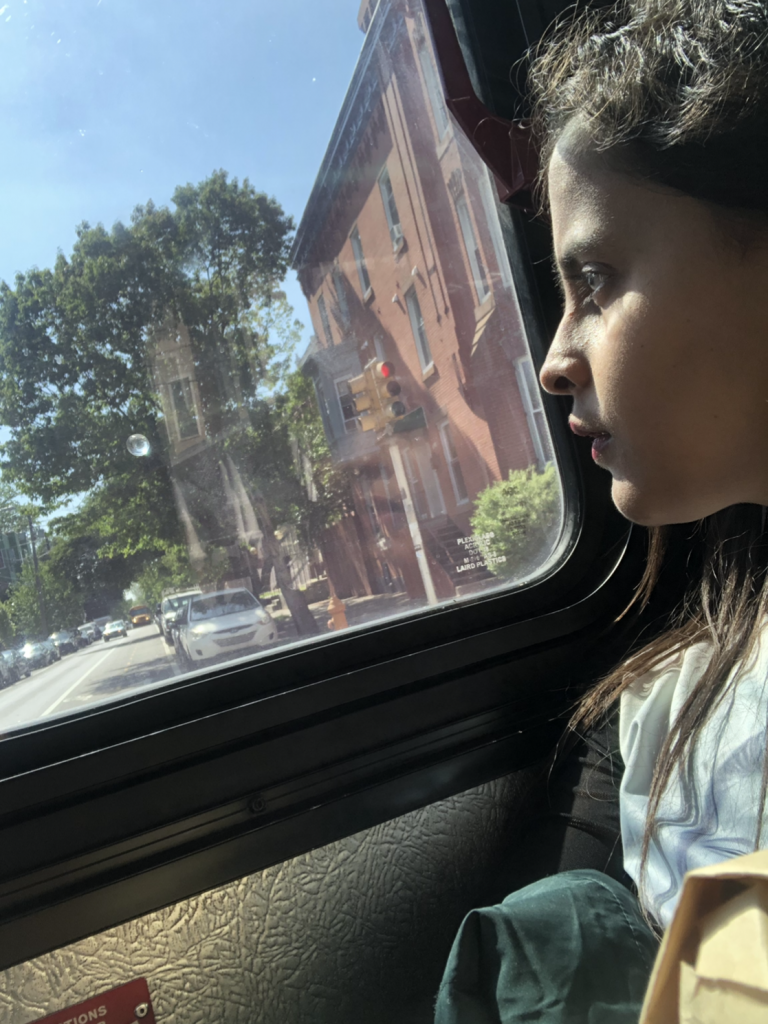 A Bus Tour Through the Quiet Mantua Neighbourhood

The influx and efflux of passengers en route Philadelphia Zoo I had forgotten to make a note of, as the bus Number 38 dived in through the quiet neighbourhood of Mantua. My attention had gripped something else by then—a bunch of dazzling Aconite wildies that peeped from the bottom of the roadside staircase leading to the ivy-hidden underground club. And then the bus sped past it and a sun-kissed, lazy, empty road swivelled into view and my delight was renewed. Two seconds later a third scene came into view—two seniors, I spotted, perched on a step underneath a flower-decked, red-bricked portico, wearing skirts and pearl-studs that didn’t fail to catch the sheen of the Sun. The moment the further one lifted his torso from the brick-walled threshold, another scene zipped into view. This one was a paved compound, a playground probably, locked in between smaller homes, sprinkled every where with dried maples and Ginkgo leaves. The bus had stopped for a moment long enough for me to take note of a group of kids walking hand-in-hand in a circular jig right there in the middle of the compound. While my eyes helplessly tried weaving together its visuals with a type of outwardly pleasure, they were allowed a pause longer than 5 seconds, at one stop. This is where I could lose myself to the Sunlight sparkle bouncing off the afternoon dews over the Begonias slithering over the archaway iron wreathe—the afternoon dews I presume were sprays left behind by someone who watered them recently. I wonder how they watered the ones over the gate!

I didn’t realize it then but I believe that sitting in that bus, flocked by the working class of Philly, driving around their homes, that identity I knew of me was being imbued to die—I was merging into everything around me, meading, in unnoticed submission, into an original native of the city, transpiring to the melancholic thrill of traveling to places never seen before, staring at people I have never known, trailing away and away from every single person I always knew, awakening a nascency, a naivety I had pushed aside at the time I was born. A gumption was being born, something I know in hindsight could never have been possible had I been seated in the familiar.

I recall standing over the floorboard remnants of a wooden cabin, skirting the boundary of a paved compound housing a group of rarely used, yet pristine clean, toilets. The first view of the breaking front of the waves of the Sandy Hook Bay seemed to announce a ceremonial feeling—as if they never expected to see an explorer return. The compound, the floorboard and the sandy path leading to the beach were peppered with millions of fountain sprouts of needle grass, sprinkled with either an early morning shower or with dew. As Suvro, my school friend, fetched the bottle of water before locking the Enterprise rental car, I gaped wide-eyed at the bay’s sombre rendition, having cast aside all my anticipation of a sunny day by a beach with waves that welcome you to ride them. By the time I lifted a purple shell off the shore and began playing with it, Suvro was already at the beach, messing with me. 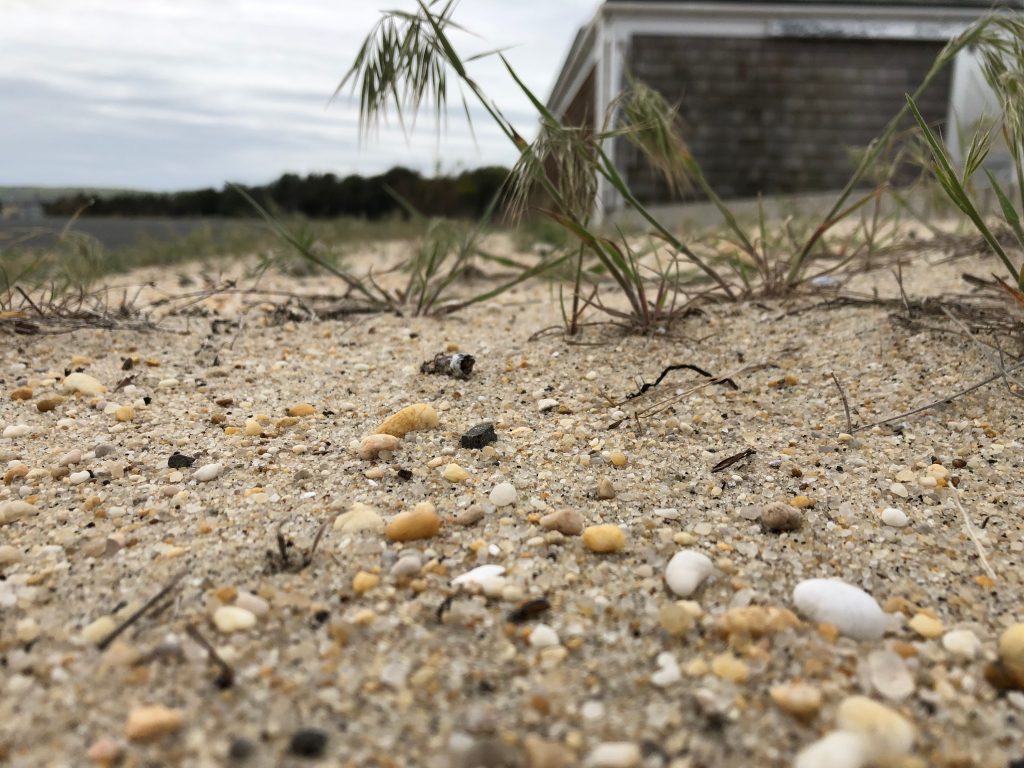 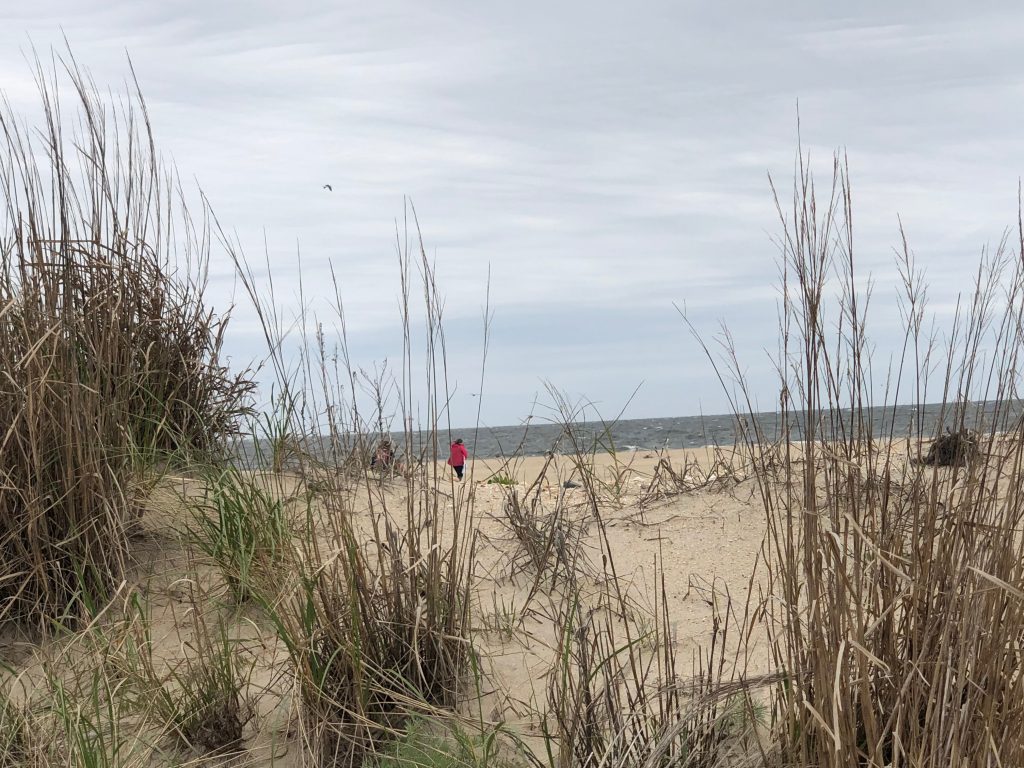 “Go! There’s your beach. Go swim in the freezing water,” he jeered, relishing his first opportunity to grin at my choice. It was all in mirth, by the way 🙂

I messed back, and stepped forwards in conviction. I was heading for the foam line—my feet never having tasted the North American waves before, the watchful sea daring me towards its ferocity.

I reached. I stepped in.

Instantly I pulled my feet back. It was freeeeeeezing cold!

I heard Suvro’s chuckling released to the North wind.

And then he showed me something. “Hey look at that!” he shrieked at me.

I turned to look and he was pointing towards the north. I followed his finger and skewed my feet at an angle in the wet, yielding, wave-soaked sand. And that’s when I spotted this——

Floating over the north sea was a ghostly train of spectral columns separated by gaps in between—A distant city on the other side of the bay.

“New York”, Suvro filled me in.

I held my breath and shot my glance first, in surprise, back to him, and then, towards the city.

New York! Wow! New York! Unbelievable! I am so close to a city I have dreamt about for so many years. The World Trade Centre/ Grand Central Station/ Kevin McCallister in Home Alone Part 2/ Baby’s Day Out in Central Park…. It all happened here! And I get to see it, like for real! That very city is there several kilometres away from my eyes right now. It isn’t a picture in a magazine or pixels on a screen—it is the real city!

And I believe I sank to the sand and dissolved into a river of surreality. 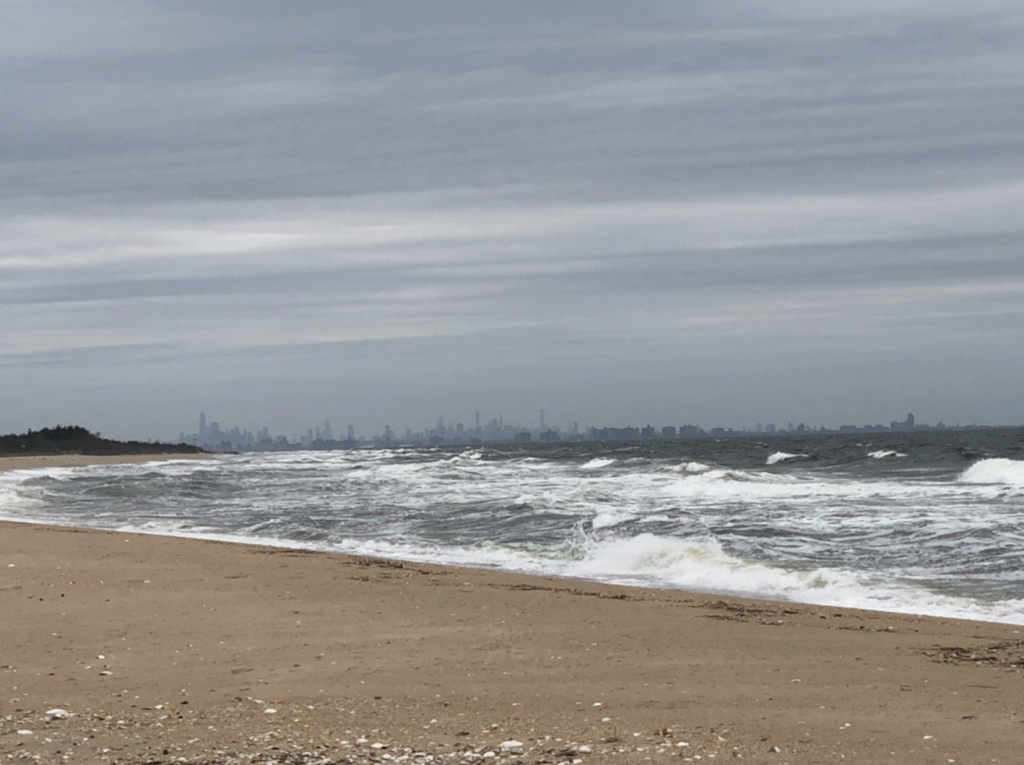 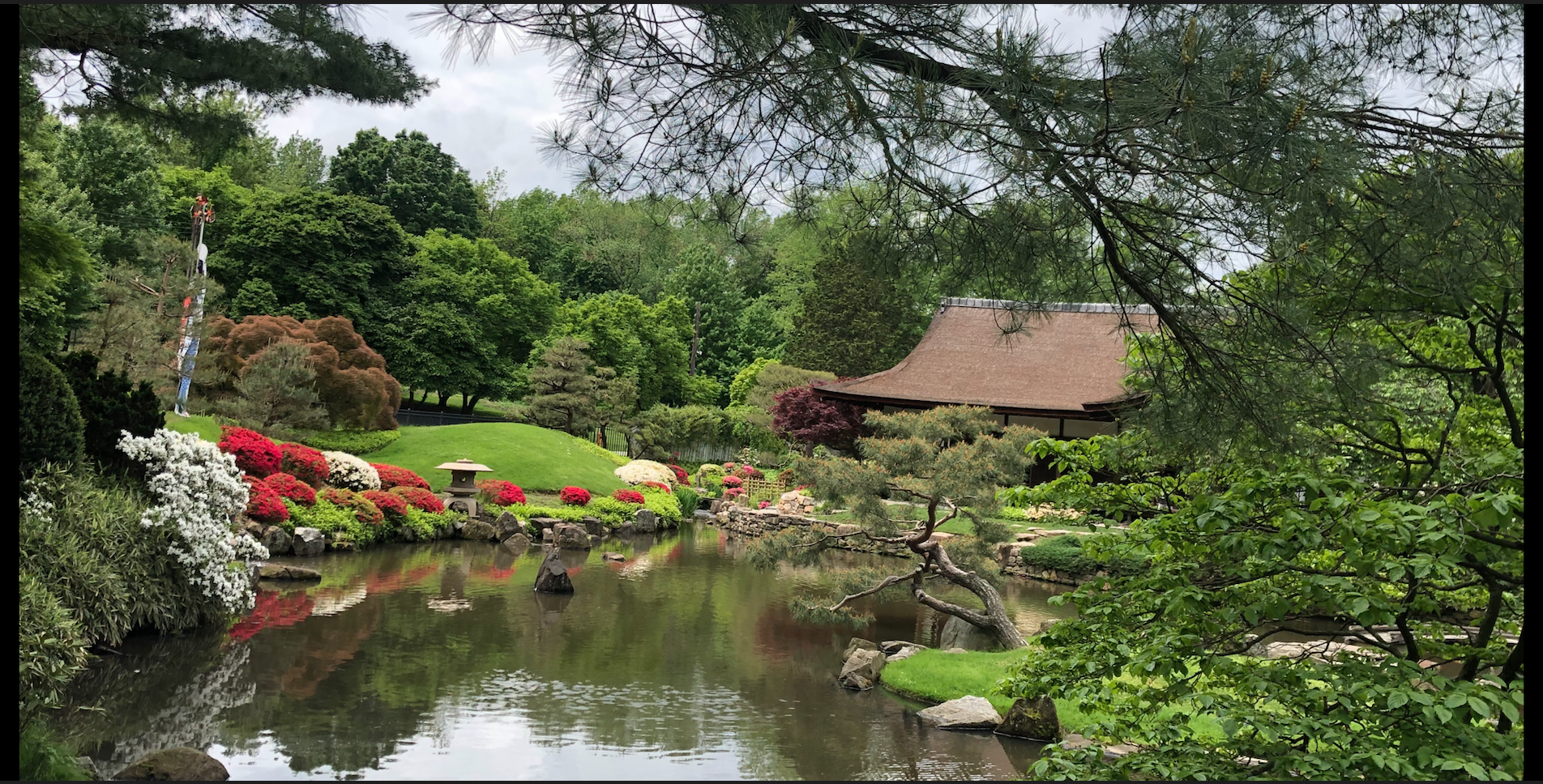 Easy route—a swipe through my Moveit App, then Bus number 27 which takes you straight to Montgomery Avenue and here on you walk, and you land into a gateway of green and vibrant heads of florets that produce a shroud of peaceful radiance, far removed from the concrete, glass and traffic of the rest of the city. The nearest stoppage where the bus does drop you is Montgomery Avenue after which you got to walk, but every turn you take from here on is beautiful.

On the way, you will see grassland hillocks which you will be tempted to ride over and yet stall yourself from treading. There are fenced patios on the outside, with hidden Clematis Jackmanii and Nerium Oleander flowers in full bloom, hugging the sides of the benches and the centerpiece garden fountain. Wonderful place, indeed!

Shofuso Japanese House is a traditional-style Japanese house and garden that reflects the history of Japanese culture in Philadelphia. The house was designed by architect Junzo Yoshimura and was built in Japan in 1953 using traditional techniques and materials.

This historic garden and the museum in it features the authentic interiors of a Minka ( a Japanese home)—featuring the doma ( meaning mud-plastered floor of the kitchen), the kemuridashi ( the roof holes for the smoke) and the nagashi ( dry sink).

“As I stepped inside, I was lost in time. Having spent months reading about Japan, the language, the people, and the animation stories, the realization that I was inside an actual piece off the land, was galactical, to say the least.” 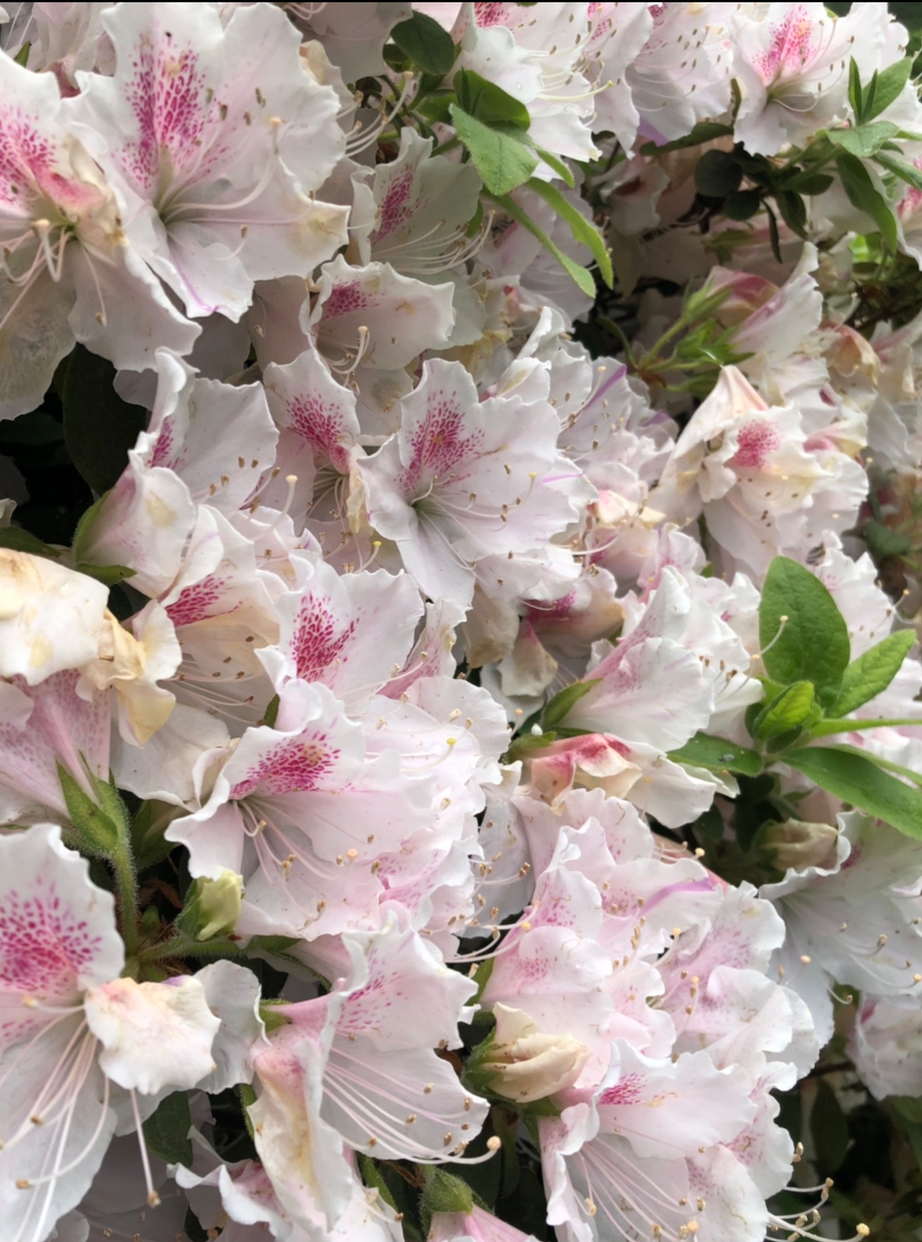 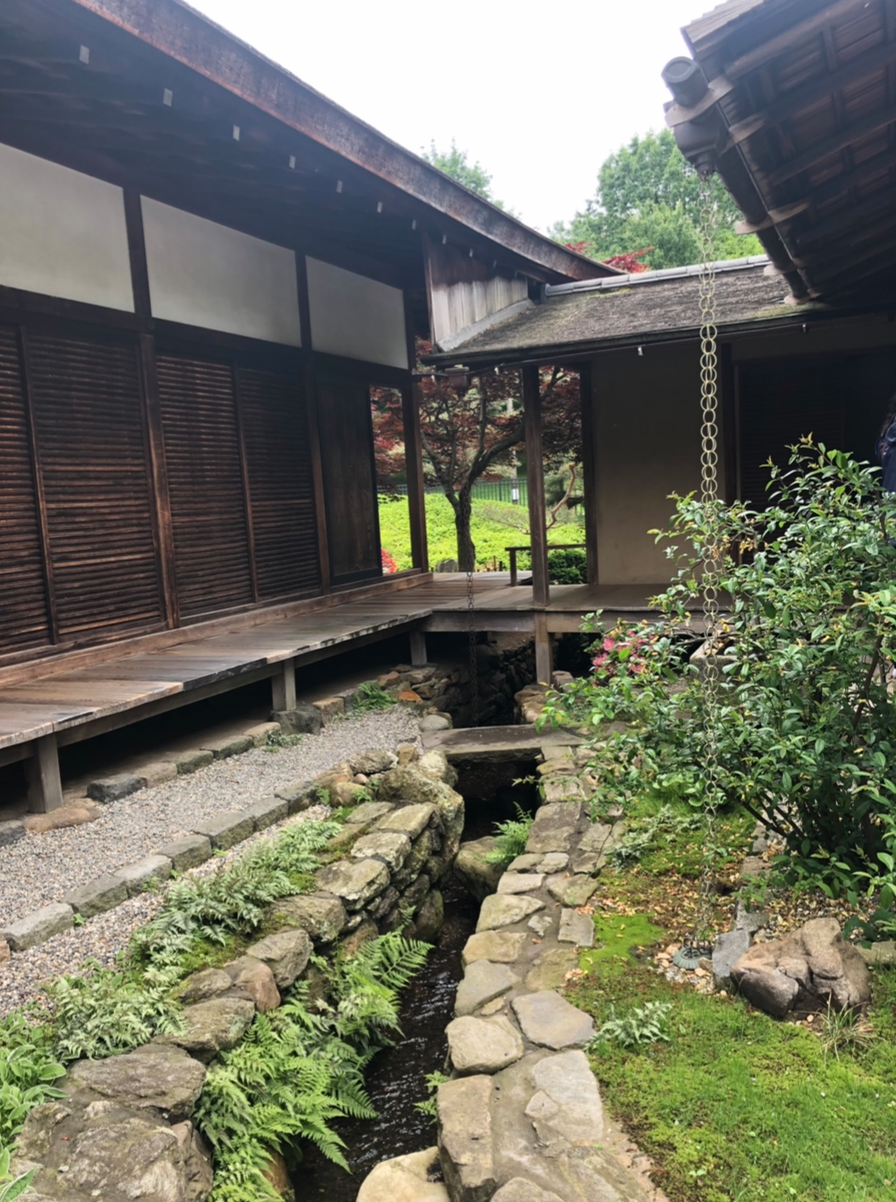 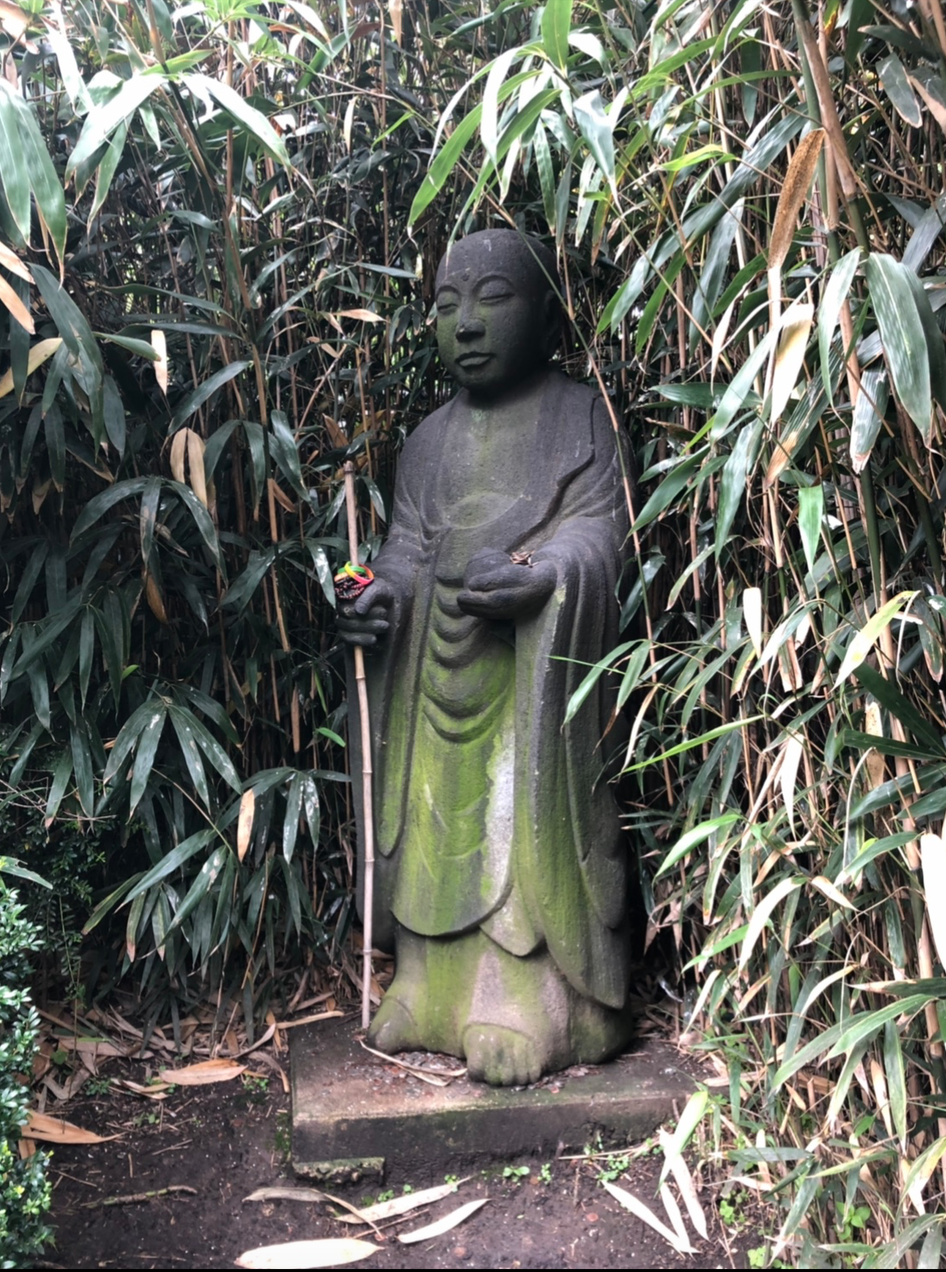 When Every Single Thing You See Inspires You To Create

‘Spirited Away’ by Hayao Miyazaki Did Carry My Spirit Away